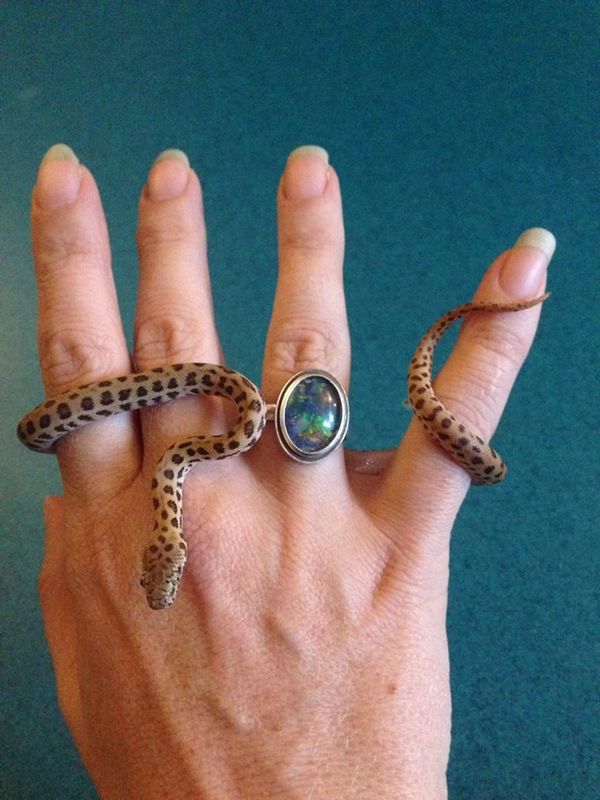 Photos provided by the author.

Spell for a Skin

The week of the Spring Equinox, the letter arrives.  When I see ‘Department of Wildlife’ on the envelope, I rip it open at the letterbox. My snake licence is here. The search begins.

A two-year-old python is for sale in Melbourne’s north.  The tank he comes with is actually a coffee table, its top a glass panel looking down at the snake. This would make afternoon tea with phobic friends quite the event. Another has the sobering description ‘Bit snappy. Not for beginners.’ My husband shakes his head.

The decision to welcome a new creature into our home is a serious one. I’ve been doing research for months; tank temperatures, species requirements, feeding strategies. The average lifespan of a snake is twenty years. They’re fed mice once a week that are kept in a freezer, thawed to body temperature, and dropped in the tank with tongs. This will be my job. My writing studio has shelves of bird bones, deer skulls with antlers, and a framed bat skeleton, wings outstretched. Bell jars of snake skins sit atop a bookcase. As research for the novel I’ve just finished, I’ve learned to do my own taxidermy. I can be called many things, but squeamish isn’t one of them.

We decide we need the guidance of experts and drive out to a suburban specialist. He takes us to multi-level racks filled with small takeout containers. When he peels back a lid, we peer in. A baby snake is curled under a wad of paper towel, as tiny as a twig. It’s best to start with a hatchling, he tells us, before any bad habits begin. Which one do you want? When my hand hovers uncertainly above the container, the snake strikes at me. Not this one, I say. He shows us other containers, other snakes, and they all strike out. Anxiety is fluttering in my chest. This is not the way it’s supposed to go. I ask for five minutes with my husband, who says, we can go, baby, if it doesn’t feel right. But today is Snake Day, and I know ours in here somewhere. Let’s keep trying, I tell him.

The next container reveals a baby snake the colour of sand, with caramel spots. She looks like a tiny cheetah. When I pick her up, she curls around my fingers and holds on tight. She seems to like me. She is quiet, still, not at all active. All the things that tell me I’ve found my snake are actually heralding different information, but I don’t realise that until much later.

We drive home with her on my lap in a little zip-up pouch. I want to hold her up so she can see the view.

Snakes have always spellbound me. I collect their skins from local pet stores and country friends. Thirteen of them are tattooed on my skin in blue and black ink, framing Medusa’s knowing face and draped around her bare feet. I’m entranced by their resilience, and ability for renewal.

At times in my life when I felt I lacked these qualities, the mythology of the serpent fed me. I read of the Ouroboros, such as the Midgard serpent in Norse mythology whose release of his own tail will bring about Ragnarők, the end of the world. It took me a long time to register the difference between lacking resilience and the ability to renew, and simply not knowing how to recognise it within myself.

When we get my snake home, I curl up cross-legged at my altar in the corner of our bedroom. A royal blue cushion holds treasures from thirty-three years of Witchcraft: a silver matreshka bell from St Peterburg, a cast iron cauldron from Salem, rosary beads from Cologne on my 18th birthday. Every bedroom through my 20s, 30s and 40s had held a similar array of The Special Things. It is the place I begin each day, and the place I end it.

I put the bag on my altar and gently unzip it.

A tiny head pokes out, with a pointed, perfect face. She slides out of the pouch and curls around one of the cauldron legs. She lifts her face. A tongue flicks, and my heart fills. She is testing this new home, and testing us.

She proves to be inquisitive, playful, placid. Her tank is a tiny humid jungle next to the bookshelves. My stepson watches her, fascinated. I ask if he’s ready to hold her. He nods and spreads his hands out. She slides slowly across his palms and straight up the sleeve of his school jumper. He freezes, eyes wide. She moves along the length of his sleeve, a tiny tunnel under the wool. Will she bite, he whispers. Only if scared, I tell him, but in truth, I don’t know.

There is much I don’t know about raising a young boy. A snake bite is just one more question into the mix. I have come to marriage and step-motherhood late, unexpected and unprepared.

But I try. I learn his teddies’ names and wash his little Spiderman pyjamas. Once, I tease him that I will taxidermy him if he’s naughty and place him on the mantlepiece among my collection. His face pales, little fists clench and unclench. I am learning the anxiety and awe that comes with helping a young child find his way in the world, and building him a soft place to land.

But I am still a Witch, a fairy tale stepmother trope, and now I have put a snake inside his clothing.

She is curled up in his armpit. It tickles, he giggles. She likes the warmth, and so begins a habit of sliding into our clothes over the coming weeks. She sleeps in my bra as I edit my novel, and slides through my husband’s chest hair while he reads.

But she does not eat. I thaw tiny mice no bigger than the tip of my little finger. At the pet store I compare sizes, on my knees in front of their open fridge. In my own fridge I have become accustomed to the strangeness of a child’s juice bottle and lunch box treats. Now, it seems, I have become the kind of woman who also keeps dead mice in her freezer.

She shows no interest in them. I ring the specialist; I ring the vet. They give conflicting advice. Rub the mouse along her face so she catches the scent, I’m told. My snake flinches, and hides under her branches. The mouse bodies cannot stay long under the warmth of the lamps, so I frequently replace them.

One morning I check the tank and find a tiny skin, shed whole, with a delicate point where her face used to be. It’s one of the most beautiful things I’ve ever seen. I place it on my altar, and try to take it as a sign she will thrive.

But she doesn’t. She loses weight, when she is so little to begin with. The specialist tells us to bring her in. I feel sick with guilt and fear as we drive her across Melbourne in the same ziplock bag she came home in.

He shakes his head when he sees her. She might have been sick when we sold her, and we just didn’t know, he tells us. It happens. He whisks the bag into an assistant’s hands and she is gone before I can say a goodbye, a prayer, a blessing. We’ll force feed her, he tells me.

But if you want, I’ll just give you a replacement now, and we can call it even. I turn and leave the store because I have a sudden, shocking desire to jump the counter and place my hands under the jowly mounds of his neck and tighten them until I hear bones crack.

Three days later I’m preparing to go into a recording studio to read out my work for a radio show. I sit outside State Library and practise. My phone rings from an unknown number. We’re so sorry, a voice says. We think it was her heart. I walk along Swanston Street and into the studio. As soon as I shake the producer’s hand I start to cry. I’m so sorry, I keep repeating. My snake just died. I’m so sorry. I record my stories, and know I will not listen to them when they air. I think my voice doesn’t tremble, but I will never be sure.

Her skin is still on my altar. The tiny point from her face has two miniscule holes where it gave way around her eyes. The skin is so delicate, and so beautiful.  My stepson likes to touch it, again and again, as we share memories of her. And under a waxing moon I hold her skin in both hands, marvelling at the delicacy of its scales, and the regeneration it still heralds.

The following features are available for members only. To continue, you will need to be logged in using your Library Barcode/User ID and PIN.

Please sign in using your Library Barcode/User ID and PIN.

Click below to become a member of the Moonee Valley Libraries.

The following features are available for members only. To continue, you will need to be logged in using your Library Barcode/User ID and PIN.

Please sign in using your Library Barcode/User ID and PIN.

Click below to become a member of the Moonee Valley Libraries.